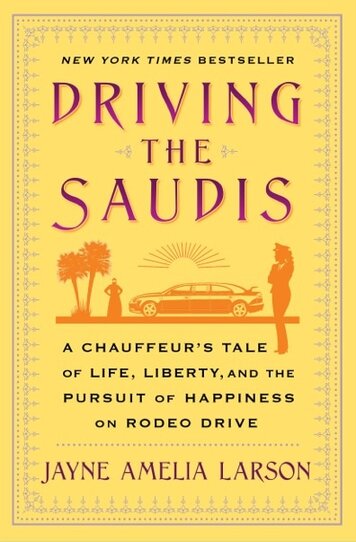 ​My one-woman show, DRIVING THE SAUDIS, has been performed nationwide
and in Vienna (Austria), and won Best Solo Show at the 2010 New York Fringe Festival.
It is now a New York Times and international bestselling nonfiction book.

​When the Saudi royal family vacationed in Los Angeles, they hired Jayne Amelia Larson, an actress struggling to make ends meet, to be their personal chauffeur. She’d heard stories of the Saudis’ outrageously generous gratuities and figured that several weeks at their beck and call might be worth her time. But when the family arrived via their private jet with an entourage of forty and millions of dollars in cash, Jayne Amelia realized she might be getting into more than she bargained for... Based on the author’s successful one-woman stage show, the story depicts a vivid portrait of the Saudi royals as few ever get to see them. At its heart, this is an upstairs/downstairs true-to-life fable for our global times.  It’s a story about the corruption that nearly infinite wealth causes, and about what we all do for money.  Told with compassionate insights and humor, DRIVING THE SAUDIS provides both entertainment and sharp social commentary on one of the world’s most secretive families.

Kirkus Reviews: “The engaging memoir of a struggling Hollywood actress/producer's experiences working as the chauffeur for the women of the Saudi royal family...No one, including the author herself, escapes Larson's witty scrutiny. The Saudi royals may have been blind to ordinary reality, but Larson, who ‘did it for the money,’ was equally blind to the fact that to her employers, she was just a woman and servant driving other women.  Sharp-eyed and humane.”

Publishers Weekly: “Larson reveals herself to be an articulate and observant writer. She balances colorful tales of excess with musings on women’s roles, and accounts of bad behavior with consideration of the reasons behind it. There are lovely moments, too: she developed a bond with a nanny and a gaggle of servant girls and their kindness offers a counterpoint to Larson’s often disturbing revelations about money, power, and perspective. There’s plenty of fascinating insider info, too, about the job, her charges (Saudi and otherwise), and Los Angeles – altogether, an often thoroughly enjoyable read.”

David Pitt (Booklist): "When the author, a Hollywood hyphenate (actor, voiceover artist, producer), came into an unexpected financial crisis, she needed to find a quick fix to keep the cash flowing. Because you don’t need a special driver’s license to drive a limousine, and because some of her actor friends told her it was a pretty good gig, she decided to become a chauffeur—just temporarily, you understand. But she didn’t expect to wind up driving around some of the world’s wealthiest people, members of the Saudi royal family. The book has a Lives of the Rich and Famous feel about it, but it’s not all about the money and the people who spent it (sometimes in utterly staggering quantities). In addition to the money, there’s some sentiment here, too, as the author comes to know these people, who seem to come from another world, and learns they aren’t so different, after all. Larson turned her experiences into a stage show, from which this memoir is derived."

Alan Caruba (Canada Free Press): “I have been a book reviewer for more than fifty years and I keep a watchful eye for the occasional book that says more about its topic than a stack of academic or geo-political books by scholars. Such is the case with Jayne Amelia Larson’s “Driving the Saudis: A Chauffeur’s Tale of the World’s Richest Princesses (plus their servants, nannies, and one royal hairdresser)...entertaining and insightful.”  CanadaFreePress.com

"Jayne Amelia Larson spent seven weeks with the .001% and returned with an astonishingly rich story to tell. Honest, compassionate, and deeply entertaining, Driving the Saudis is the story of a woman trying to support her dreams, make a few bucks, and keep a gaggle of pampered princesses happy without losing her mind (or her perspective) in the process."–Suzanne Morrison, author of Yoga Bitch: One Woman’s Quest to Conquer Skepticism, Cynicism, and Cigarettes on the Path to Enlightenment

“Driving the Saudis is an entertaining, fast-paced read. As someone who has traveled with the Saudi royal family, I can confirm that Jayne Larson provides an amazingly accurate account. So if you want to take a ride with royalty without leaving the comfort of home, read this book.” –Jean Sasson, New York Times bestselling author Princess: A True Story of Life Behind the Veil in Saudi Arabia

"Unlike most snappy memoirs about working as a temporary chauffeur for some of the richest people in the world, Driving the Saudis not only contains hilarious detail and horrifying excesses, but also serious social insight and moments of pure heartbreak. In her compulsively readable story, Larson has created memorable portraits of two cultures: theirs and ours." –Jim Krusoe, Parsifal

"A stolen glimpse into the world's most important and intriguing family. A wonderful book, wonderfully written." – Robert Baer, author of New York Times bestselling Sleepingwith the Devil: How Washington Sold Our Soul for Saudi Crude and The Company We Keep: A Husband-and-Wife True-Life Spy Story

"For seven weeks, Jayne Amelia Larson spent nearly all her waking hours chauffeuring the women of the Saudi royal family and running their errands. The result is a delightful and surprisingly introspective memoir, Driving the Saudis.
As an actress, screenwriter and producer trying to build her career in Los Angeles, Larson took a job as a chauffeur, figuring it would give her a steady income and some freedom to ponder her creative projects, as well as rub shoulders with those who might put her work in front of an audience. When the chance to drive the Saudis (whom Larson calls "the family") appeared, she took it. Rumors of hefty tips and Rolex gifts abounded, and so did curiosity: here was a chance to drive for members of the world's largest and richest royal family.
Larson's seven weeks behind the wheel are an exhausting and sometimes baffling whirlwind of activity punctuated by beautifully rendered moments of genuine human connection. When Larson wasn't driving 13-year-old princesses to the movies, she was frantically trying to collect two dozen bottles of Hair-Off or 30 $500 bras at the behest of one princess or another, or introducing the family's maids to the marvels of the 99 Cents Only store. In between, Larson paints a portrait of the royals, their staff and her fellow drivers that are warmly human and strikingly intimate. Driving the Saudis is a wild ride, but a deliciously friendly one as well.” - Dani Alexis Ryskamp, blogger at The Book Cricket